HOUSE OF THE BLUE SHADOWS

The house is situated a couple of kilometres from where the Sierra Nevada dips its toes into the azure billows of the Mediterranean.

The town of Albuñol forms the gateway to the Las Alpujarras mountain-range, where passages from the legends of Granada Province beckon the traveller into the melancholy mirage created by small white houses which dance like pearls on the slate landscape’s almond-scented rocky ridges.

The history of the House of the Blue Shadows can be traced back to the Moorish period, the Sultanate of Alhambra, palace of myths, where its origins are lost in the mists of time.

With its 400 cubic metres, the “house with the tower” thrusts its spire towards the glittering blue heavens.

The innocent outer walls hide their own universe, a private refuge which offers a firework-display of poetry and luxury. 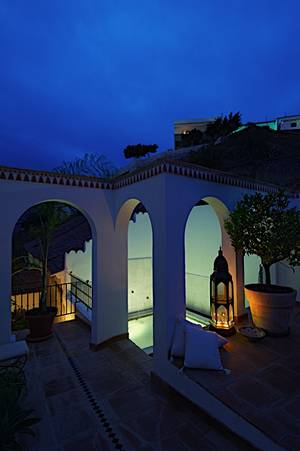 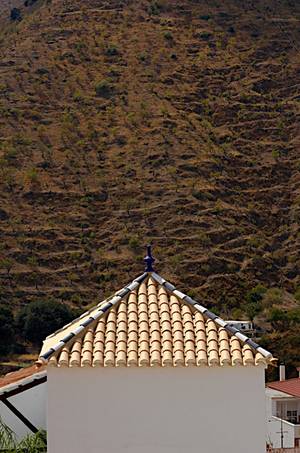 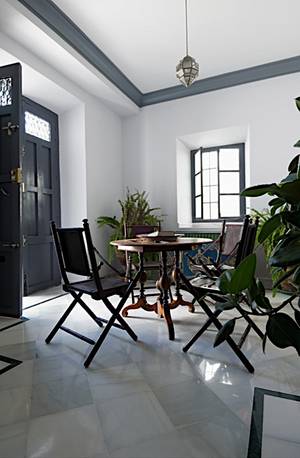 A room which marks the separation between the street and the private universe of the house. It’s the dividing-line between the public and private zone, a large rectangular hall, the positioning of which allows guests to live undisturbed in the upper part of the building.

In Alpujarras this area is traditionally situated at the foot of a staircase which ascends to the private rooms. It was traditionally used to lead horses and domestic animals in to stables which were also situated on ground level connected to the house.

THE LANTERN FROM THE ARABIAN NIGHTS 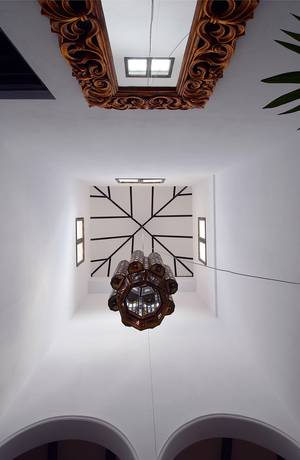 The lantern is a finely-wrought antique from Morocco. It is made of brass and is part of a set of three where unfortunately, we were only able to buy two. The second one hangs in Boabdil’s room.

The design of these Moroccan lanterns goes back a long way. The original light source was an oil lamp. The fine patterns found on these lanterns were cut by hand and create magical shadows on the walls when the light shines through the small panes of coloured glass. Today, these lanterns are often of very bad quality, but you can still be lucky enough to find fine examples like those which we’ve used to give the house its enchanted ambience.

The effect of mirroring a flying Moroccan lantern with the beams of the tower roof is a classic element in many restored Moroccan Riads. This is also popular in Andalusia, where over time it has acquired a more pompous, gothic touch. The tower originally emphasized the status of the house as belonging to one of the town’s most affluent citizens, señor-ricos. 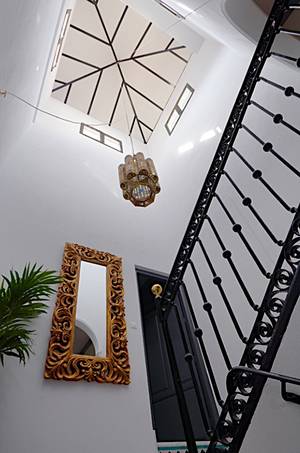 The staircase leads up to the living quarters of the house. It emphasizes the fact that the original design has been conceived as an upwardly-moving universe. It is richly ornamented with both azulejos (tiles) and marble, so it creates a keen sense of anticipation for what awaits. 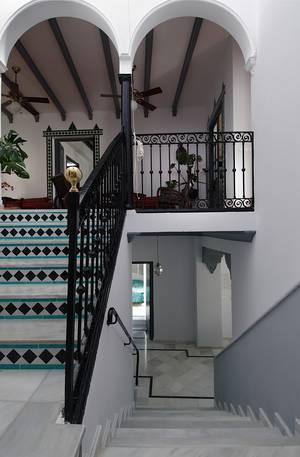 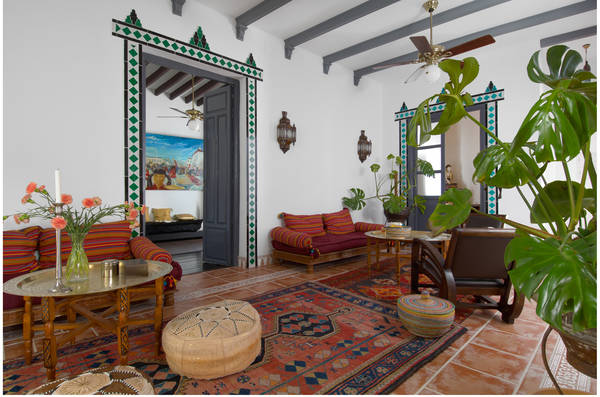 We have restored the drawing room back to its original state. It was in this room that the original inhabitants of the house lived their private lives and received formal visits.

The tiled ornamentation (azulejos) emphasizes the Mudéjar style. It is a paraphrase of the Swan Room from the Portuguese Palácio Nacional de Sintra.

The Moors came from Africa and dominated the Iberian Peninsula for more than 800 years. They were Muslims and thought that figurative art hampered the imagination and through that, disturbed one’s spiritual experience of the universe. This schism contributed to Muslim architects in the Middle Ages developing a consummate use of geometric effects and ornamentation. They brought this tradition with them from Damascus to Al Andalus, where today it can be seen in the palaces at Alhambra, Seville, Cordoba and Almeria. The style was adopted by wealthy Christians after the fall of the Moors. It is this embodiment of geometric design often mixed with Renaissance motifs that we know today as Mudéjar.
Part of the ornamentation was executed in tiles, so-called azulejos, whose patterns are filled with different symbols for infinity. The tiles in the picture are from one of the rooms at the Alhambra palace.

The library is a room created both as a work-room and bedroom, with a view out to the street and some of the finest old houses in the town.
As we didn’t want to end up with too few living rooms because of an endless number of bedrooms, we have given some of the rooms this double function. 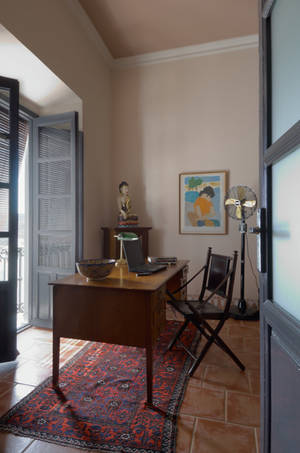 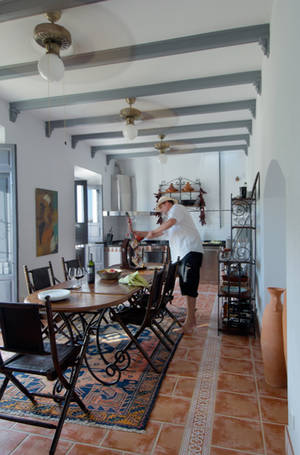 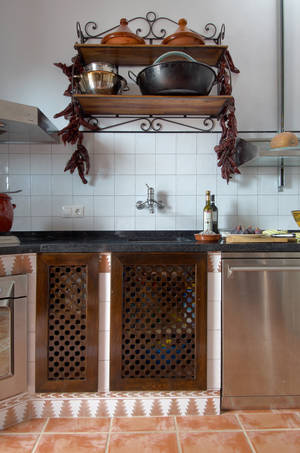 The kitchen is built of stone and ornamented with azulejos in a classic pine motif. The doors are typically Andalusian and made of plaited wood. The kitchen top is black granite.
Up to ten people can be seated round the large rustic dining table.
Even though the house has been kept rigorously in antique style, it is equipped with all the most modern kitchen elements of the highest quality and there is a dumb waiter to the roof terrace.

The bedroom suite consists of two large rooms which differ from the rest of the house by virtue of having a floor of long, solid, fir floorboards.
In the small sitting room which forms an anteroom to the bedroom itself, the sofa can also be folded out into a double bed.
Both rooms are hung with pictures from Tibet and the Danish artist Morten Klein. 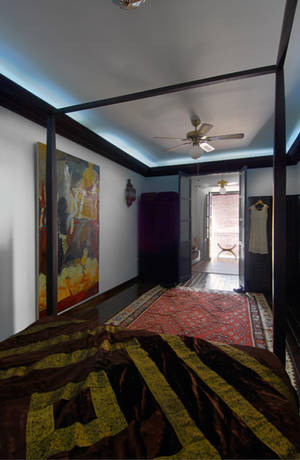 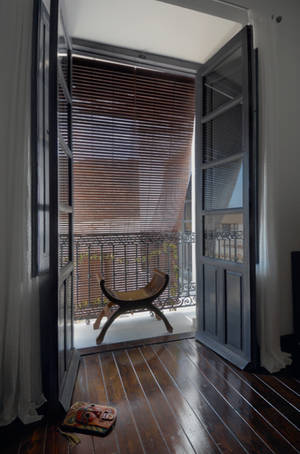 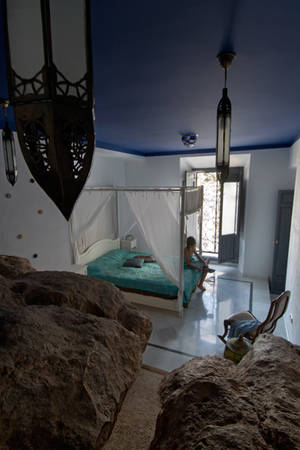 The grotto room was originally the house’s office. It was from here that the business was
administered. Recently, among other things, there has been a hairdressing salon here.
The rock itself has not been previously exposed, but has now been brought out into the light. This creates a great feeling of spaciousness and gives the room a unique character – a sort of Aladdin’s
cave.
We use this room as a children’s room.

The legend states that when the last Sultan at Alhambra, Abu Abdullah or Boabdil, surrendered the palace to the Christian kings, a curse was put upon him and all his army. Alhambra and the kingdom of Granada were at that point the last Muslim outposts in Europe.
He shall not find peace in heaven before a Muslim once again sits on the throne in the royal
chamber in the palace, and through this, justice will be done towards Islam.

Boabdil in fact died physically in Fez in 1533.

For fun, we have created Boabdil’s room to give him a place to relax in before the fateful battle.The idea for the geometric patterns is taken from Cuarto Dorado in the Alhambra palace. The sound of water creates a feeling of sensual coolness and meditative peace. The tiles (azulejos) are hand-painted with the original colours and glaze used at Alhambra. 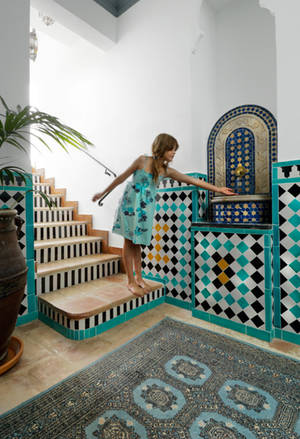 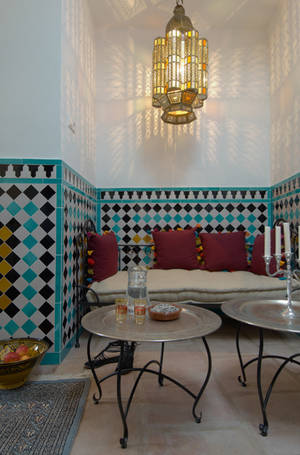 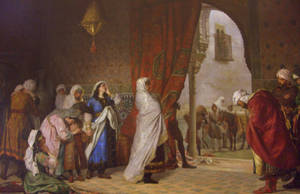 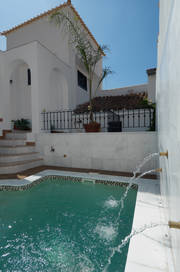