GATEWAY TO THE MOUNTAINS

Albuñol is a Granadan town situated 5 km from the Mediterranean coast. On the surface it does not look much different from many other Andalusian towns, and today, its glorious past is surely also forgotten by almost everyone apart from the local citizens.
To the newly-arrived driver, there are perhaps only two roads which look safe and appealing. All the other roads in the town are small and narrow, and more suited to pedestrians and donkeys than to cars. Therefore, many people will just hurry on up the mountain where the air is fresh and the views spectacular.
If, however, you are the type that takes pleasure in adventure and real people, and would like to enjoy your tapas together with genuine Andalusian mountain peasants, you’ve really come to the right place. On this point in particular the town sets itself apart from the masses.
Where most of the other white towns in the Alpujarras mountain landscape are lovely and so-called “unspoilt” on the surface, a closer look will reveal that the younger generation usually move away to seek their fortunes in the big cities. That’s not how it is in Albuñol. Here, young and old live together for good and ill, as they’ve done for centuries. It’s therefore not wrong to call the town a time-capsule, and by staying here a while, you can almost get the impression that you are in a sort of living museum, or in a black and white film of one of Hemmingway’s Spanish tales. 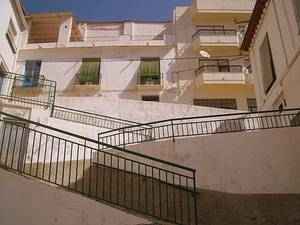 Now I’m sure that any travel writer would already have started reeling off a list praising the town’s few historic monuments. I, however, would urge the traveler to take his or her time in the town’s squares and bars. It is truly all here, so sneak quietly in. Palm trees, the scent of jasmine, overpowering bourgonvillas and hanging gardens with flowering geraniums. There is also a fine church, which in its time was built over a mosque, and small, crooked streets – but all towns have those. Most of all, a multi-cultural scene opens up before one’s eyes. Even though you don’t quite sense it to start with, the town is in the midst of a quiet upheaval where a number of immigrants has moved into some of the old houses.

Geographically speaking, the municipality of Albuñol covers a rather large area, but let’s start down by the Mediterranean where the majority of summer guests spend most of their time. Here you can find La Rabita, which is the most accessible of the three beaches. The “beach season” lasts from mid-summer day and ends on the last night of the town festival, the first Sunday in September. Not that the water is cold in March or November, but during the season, a large number of the beach bars will be open and from late afternoon onwards, the town’s inhabitants will join the overwhelming number of Iberian tourists on the beach. La Rabita is certainly not Rio de Janeiro, so the most common equipment of the “beach boys” consists of deck-chairs, parasols and large cooler bags full of food and drink. As with other leisure activities, a trip to the beach is as a rule the same as a family outing, so both young and old are clustered under the parasols whilst the children play at the water’s edge. Most make light of the fact that they are not created as fashion models.If you are the more daring type you can visit a fantastic beach with the rather odd name El Russo.Legend has it that during the first World War, a Russian soldier hid from the Germans in a grotto on the beach, where he lived like a latter-day Robinson Crusoe. It takes courage to swim at El Rosso, as the way down to the beach is very difficult by land. It’s therefore easier to swim round the cliffs, but one can of course also take the small path down the mountain side by the side of the James Bond house, as we call it. On the other hand, one is richly rewarded for one’s exertions. El Russo lies in a bay. The beach is extremely beautiful and surrounded by high cliffs with hidden caves. It is only visited by few people, which is perhaps why nude bathing is permitted here. In fact, it has been named as one of the 10 best hnudist beaches in the whole of Spain.
The last beach is El Pozuelo. This was probably beautiful 30 years ago, but today has been completely ruined by the plastic green-houses which lie right down to the edge of the beach. Amazingly enough, there are also beach bars here as, for traditional reasons, some of the locals prefer to come here rather than going to La Rabita.
From the sea one drives up through the ramblas up to Albuñol itself. It demands a somewhat romantic soul to imagine the many gardens with oranges, pomegranates, figs and vines which once gave this stretch a reputation for unusual beauty. Today, the mountain side is plastered with plastic green-houses and has an almost frightening appearance. It is therefore only the fewest who make the acquaintance of the enclaves of Haza Mora and Castillas, as most hurry onward up to Albuñol. If you continue along the main road, the mountain rises steeply and you come through Los Galves up to the wine village of Albondon, which is the last real village in the municipality. It’s here that you really experience the gateway to the fantastic mountain landscape of the part of Las Alpujarras called La Contraviesa. 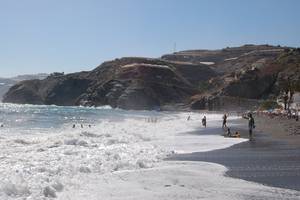 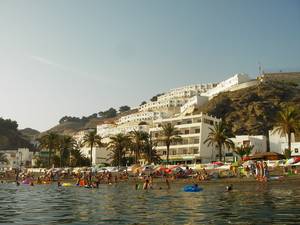 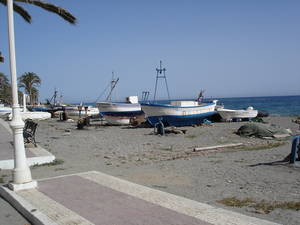 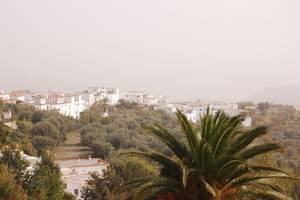 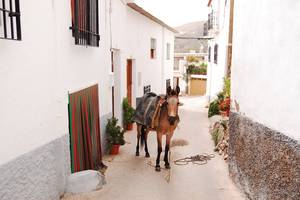 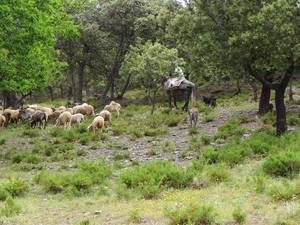 If we have captured your interest and you are perhaps thinking of renting the house, you can go on via the menu bar to the tab entitled ”Facts”.